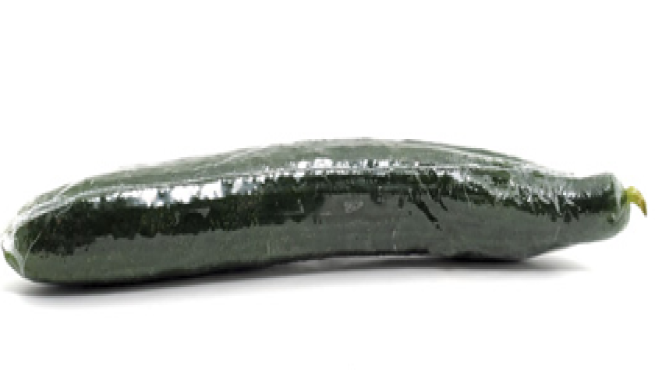 Walking the thin line (Part II): Bringing down the gauge

Not only are we actively trying to down-gauge our existing customers' films, but we are also trying to help bring thinner shrink film to other markets and applications.

It all started with a cucumber.

Over two and half years ago, we created a thin-gauge film that was crafted specifically for this fresh, green vegetable. The film blew industry standards away, because it had a gauge of 0.45 mil, which was thinner than the competition's 0.5 mil and 0.6 mil films. It was also perforated for breathability and superior shrinkability.

But it couldn't just be thinner, we knew from speaking with our customers that it also had to be superior in strength and clarity—after all, consumers need to be able to see the product to determine its freshness.

We also knew that for our new film to be accepted by the industry, it had to run on existing equipment and perform as well or better for manufacturers than what was on the market.

A lot has happened in two and half years.

Now when you see a cucumber in the grocery store and it is a product of Canada or Mexico, chances are that it is wrapped using film we created. And it doesn't stop there.

Seeing potential in this thin, yet high-performance film, we searched for other applications that could benefit from the technology.

Today, a major frozen pizza producer uses that same thin-gauge film as an overwrap on their pizza. Major bakeries use it to wrap products for resale. It is also used as a wrap for products that are shipped on trays and already prewrapped and priced.

Because of its strength, our film is being used in other applications such as bundling film. For example, it helps one pharmaceutical company keep vitamins and pill bottles in easy-to-pack groups of six and eight, while they are shipped to warehouses for distribution.

We're continuing to work with new customers to adapt our thin film to new markets.

And for existing customers who are using thicker films, we're always working on improving performance and down-gauging their films. More on that next time.